Today we left the beautiful town of Samaipata to head on to Vallegrande and at night we arrived in La Higuera  taking the old trade route and the route of Che. It took us about 2,5 hours to get to Vallegrande passing through beautiful landscapes full of cactus, mountains and evergreen landscapes. In Vallegrande we had lunch and visited different sights in memory of Ernesto “Che” Guevara.

First we visited the mausoleum of Che Guevara which is situated just a couple of meters from where they found the bodies of Che and 6 other soldiers in 1998 after they had been searching for 30 years for their dead bodies. The mausoleum shows many pictures of Che’s life: as a baby, in school, with his family, going on a motorbike ride through South America and during the Cuba revolution and all his fights. 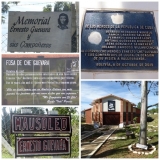 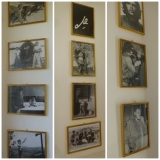 Then we continued to the washing room of the hospital in Vallegrande where Che’s dead body was exhibited for the first time to the international press for 2 days. Our local guide told us all the important stories. In the second night Che’s body disappeared and was taken by the military. Before both of his hands were cut off and sent to La Paz to verify the identity of Che. Until 30 years later his body was found by Cuban and Argentinian scientist after 2 years of searching. Afterwards they took these parts to Santa Clara in Cuba – the place of his biggest victories. The washing room in Vallegrande is the only original place that still exists of these times and has been conserved as a tourist site. The hospital is still working. Actually the nurse who washed the dead body of Che Guevara is still alive and keeps living in Vallegrande and can be visited (but as you can imagine she must be tired by now telling this story over and over again ;)!).

Afterwards we continued on a long ride off-road to the small village of La Higuera. Here we spent the night in the charming little “Casa del Telegrafista”. A french lady named Oda renovated this beautiful place whose “living room” where our food was served was the room of the “telegrafista” who send the telegraph to the United States that Che was in this region. It is a very cute small place with 4 rooms and Oda serves delicious food! I would definitely recommend to stay with her in La Huigera.

After a delicious breakfast we visited the monuments of Che in this small village and the school where Che was killed. From here he was transported by helicopter to Vallegrande but actually they hung him on the helicopter so that everyone could see that he was dead. 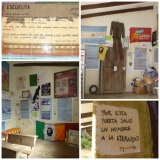 On the way to La Higuera 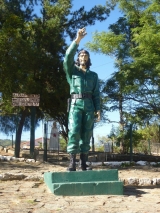 Afterwards we went on a 2 hour hike to the “Quebrada del Churo” where the military captured Che and two other soldiers. Once they captured him, they took him to the school in La Higuera which was a steep walk up the hill. For us it was a nice walk through corn plantations and thick forest as well as beautiful views of the surroundings. 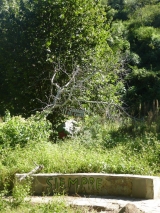 Then we continued our journey on the old trade route to Villa Serrano passing many mountains and beautiful countrysides. Just before arriving in Villa Serrano there is another village called “Nuevo Mundo”. Near there you can do a hike to the waterfall Pajcha but unfortunately we did not have time to discover it. Villa Serrano is a small town but very famous in Bolivia because they have built the biggest ” charrango” – a typical guitar which even made it to the guiness world records. So the village itself is very famous for the construction of charrangos which are ordered from there nationwide. 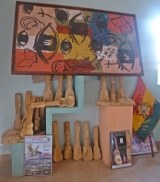 Then we continued our trip  to the capital city Sucre. On the way we stopped at different view points from where we had a wonderful view of the beautiful countrysides in the surroundings. The best was going to the top of the mountain “Calle Calle” where we enjoyed an amazing view of 360 degrees.

On the way to Sucre we also made a stop at the Lamboyo canyon where we went for a small walk and were lucky enough to spot the biggest hummingbird “patagona jiguis” which has the size of about 30cm. 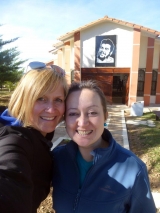