Bienvenidos a Capurgana! This little piece of land on Colombia’s Caribbean Coast has always been a place where I wanted to go. Unfortunately it is not so easy to get there and therefore I have not made it there yet! Even though there are actually many possibilities to get to Capurgana which are the following:

3) from Medellín 8 hours and from Cartagena 6 hours by bus to nequocli – from there by boat to Capurgana for 1,5 hours

4) if you have a friend that is pilot who can take you directly there in his little aircraft 😉 – which was luckily my case!

Ready for take off! 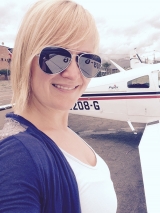 I was lucky enough that the first cruise ship was coming to Capurgana and we were taking care of the passengers and showing them this beautiful hidden place on Colombia’s Caribbean. As my boss is a pilot we went from Bogota to Capurgana by a small 4-seater aircraft! By the way – this is one of the reasons why I just love my job! The landing strip appeared just after passing the jungle and mountains and it was in the middle of town! As there are not many arrivals, the brandnew (and only paved “road”) is also used for playing football and motorbike races by the locals, so we were happy that we had free access to land safely.

I have already been travelling to a couple of remote areas, but I must admit that I am always surprised again by the airport “infrastructure” of these regions – which is basically not existing, just two souvenir shops, a room for the check-in and some seats to await the plane! The airport in Capurgana had another “attraction” with a parked old damaged aircraft which was a drug plane that was found there only about 50 years ago. At the moment they are actually thinking about taking it to the ocean to make it a living place for the underwater world and a tourist attraction for divers – as Capurgana is also a great place for diving and snorkeling!

The little village counts 2500 inhabitants and it basically has no motorized vehicles. Just a couple of years ago they permited motorcycles here which means that you will find some motorbikes there but most likely you walk, go by bike, horse or “horse-carriages” that take you everywhere and are the taxis of the town. Years ago, Capurgana was home to the indigenous community Kuna that lived from planting chili (“aji”) and coconut there. Actually the meaning of Capurgana is “land of chili”. Later boats full of people from Cartagena and Montería came to buy coconut and afterwards these people stayed to cultivate coconut and reemplaced the indigenous communities. Once Panama gained its independence in 1930, the majority of the indigenous tribe Kuna stayed in Panama where they still live today. 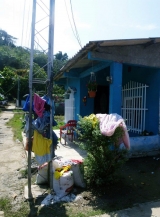 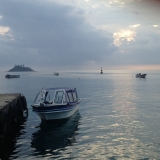 For travelers, there are great possibilities of hikes in Capurgana and its surroundings. Of course, you can also just relax on the beautiful beaches or go diving and snorkeling. The walk to “El Cielo” is about 9 kilometers through the jungle and it takes about 2-3 hours. It is very flat and you will cross rivers by passing through little stones. Furthermore you can observe the flora and fauna of this region. For example, you can see many bird and butterfly species as well as howler monkeys. El Cielo is a small waterfall where you can take a refreshing bath before heading back to town again. 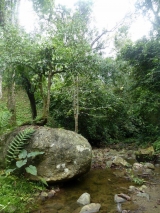 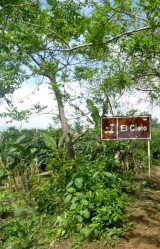 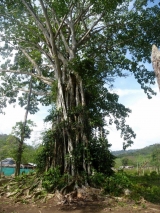 Another hike is to Sapzurro which is a little more demanding as you will need to go up a steep hill about 1km and also down again to Sapzurro. On the top of the mountain is a great view point to see Capurgana on one side and Sapzurro on the other side. In total the walk is about 4 kilometers and takes around 1,5 to 2hours. Here you can also observe the beautiful flora and fauna. 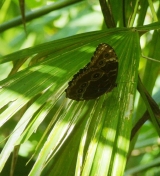 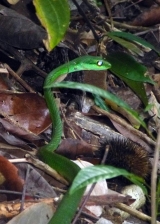 From Sapzurro you can head on to La Miel which means crossing the border to Panama. Here you can find a beautiful beach to just relax, have a typical lunch or go snorkeling! There are always boats that can take you around between Capurgana, Sapzurro and La Miel. 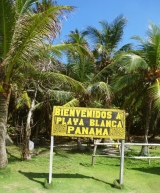 We stayed at the Hotel Tacarcuna Lodge which has nice little cabins with a hammock in front of it, a big pool and nice restaurant. And if you go for lunch or dinner, you should not miss to try the delicious food at the small restaurant “Donde Josefina” on the beach – it is one of the best food I ever had prepared by Doña Josefina herself! If you like off-the-beaten-track destinations, nature and quite relaxing beaches, then Capurgana on Colombia’s Caribbean Coast is the place where you should go – it’s just beautiful! 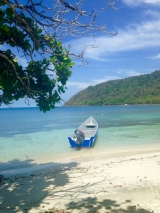 on the way to Capurgana 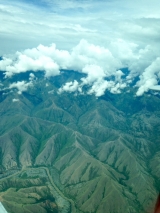