Today a long drive through the desert land of La Guajira awaited us. For about 5 hours we were crossing various landscapes with pure desert, many different kinds of huge cactus, lagoons of blue and green tones, even small woods and we observed flamingos. Only some Wayúu kids stopped us on the way asking for water and sweets.

Flamingos in the lagoons of La Guajira

Cactus along the desert landscapes

Flamingos in the lagoons of La Guajira

On a rancheria we stopped to have lunch and continued our way to Nazareth near the Macuira National Park. This town really was in the middle of nowhere and getting there on a Sunday probably did not help much. We almost did not see anyone and everything was “dead”. We were lucky enough to get some beers and enjoyed the evening by listening to the music from our car radio and danced a little bit in the middle of the town! Tonight we spent in a typical chinchorro (hammock). Actually I would have slept wonderfully but as it got pretty cold at night, I was more busy with tucking me in tightly!

Early the next morning we continued our journey to Punta Gallinas. Today we would reach the most morthern point of not only Colombia but also South America! After 3 hours we reached the impressing dunes “las dunas de Taroa”. We parked the jeep just in front of the huge sand dunes and once we got out of the car the tremendous wind was blowing the grains of sand in our face. But we really didn’t care – this amazing landscape just caught our complete attention and we climbed up the dunes. It actually felt we just arrived in the middle of the sahara! Once we reached the top, we could not believe our eyes but there was a huge emerald lagoon in the middle of the dunes – and there was no one else – just us! I would have just loved to stay the rest of our trip at this amazingly beautiful place in the middle of nowhere! 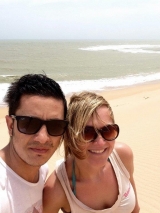 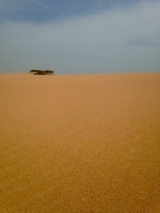 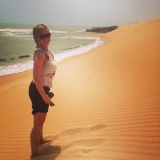 But there were some more places on our travel list and so we continued to the faro “lighthouse” of Punta Gallinas. After about 30 minutes drive we reached the most northern point of Colombia and South America which was marked by little stone pyramids of travellers that have made their way here in front of the big ocean! Of course, we also built our own stone pyramid and took some time to breathe in this fresh ocean breeze just thinking about having reached this fascinating peaceful place – or should I call it Colombia’s version of the end of the world?! 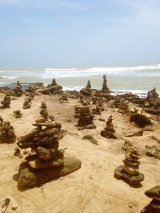 Have a look at my other experiences exploring Cabo de la Vela & Punta Gallinas!