Medellín – the so-called city of eternal spring is always worth another visit! Actually this time I just wanted to enjoy a relaxing weekend in the sun and therefore my friend Eugenia and I relaxed a whole day in the spa area of the great hotel Diez right near the famous neighborhood “El Poblado” where you can find many bars & restaurants. Of course, at night it was party time. As the climate in Medellín is so amazing, it is very usual that the “party night” starts in the park of “El Poblado” drinking beer, rum or aguardiente and enjoy to watch the people passing by!

At night we were lucky enough to get to see the famous Christmas lights of Medellín. To be honest, I didn’t really expect so much – at least nothing different than I have seen in other Colombian cities as people get crazy decorating all their houses, streets, shopping malls with hundreds of Christmas lights. But Medellín tops it all! I really couldn’t believe this! There are Christmas lights everywhere as in any other city but on top of this more than two kilometers of the Medellín river is completely covered with different figures of colorful Christmas lights and hundreds of people go to see this spectacle.

This event always starts in December and lasts until the first/second week of January and I must say, it is definitely a must to go to Medellín and see this amazing work of hundreds of artists if you are in Colombia during that time. Even the National Geographic announces Medellín as one of the top cities worldwide to see Christmas lights. 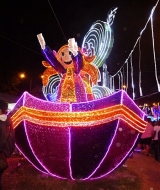 The sponsor of this event is EPM – the city’s public utilities company. The Christmas lighting was planned as a sustainable project with energy saving lights and has over 30 million LED lights, more than 800 kilometers of rope lights, 11 tons of metallic decorative paper, and 170 tons of ironwork, among other things. It is the masterpiece and work of about 330 artists – many of them are single moms. 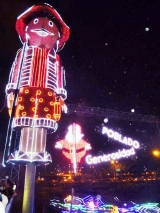 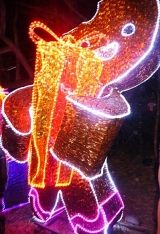 Every year the christmas lights festival in Medellín has a new topic. This year’s theme is “Carnaval de Luz” (carnival of lights) which represents a circus with carnival rides and themed tents. This year the majority of these christmas lights can be found in downtown along the parks whereas last year the main place could be found along the river of Medellín. Actually the theme and slogan for the light festival of Medellín – the “Alumbrado” in 2014 (when I was there) was “Values illuminate Christmas”. In every single figure you could find a story behind it. For example, hope, tranquility, forgiveness, tolerance and love were some of the shown values. So they created a Christmas story which is about a girl named Paloma who travels on a boat on the river of peace (the Medellín River) looking for the most beautiful values in life. She stops along the way on different ports to learn about different human values. This whole story was also shown in a spectacular light-water-show with music and impressing light show and the video of Paloma and her friends travelling displayed on water fountains. 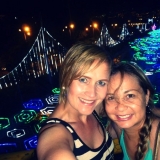 I must say there is always something new to explore in Medellín and its surroundings – and the climate is just perfect with an average of 22 degrees. Every time I go to Medellín I wonder why I live in the so called “fridge” Bogotá – but well, I will be back to discover more of the city of eternal spring! 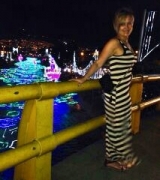