Bolivia has always been on my travel list and finally I got the chance to go! I would say this country has a similar “problem” like Colombia as nobody really knows what the country has to offer: All you have heard about Bolivia are probably the salt flats in Salar Uyuni, the Titicaca lake and that it is inhabited by many indigenous people! Well, let me tell you there is much more to discover in Bolivia and I will be happy to share my great experiences in this beautiful country in my following blog articles with you! 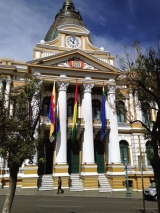 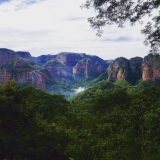 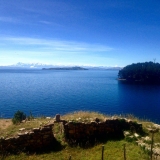 Before going to Bolivia you should get prepared for the altitude. You arrive at El Alto Airport which lies at an altitude of 4.000m and then you go down to 3.400m to La Paz. About 2,5 million people live in La Paz which is actually not the capital city of Bolivia even though it is the seat of the government. The city is situated in a valley and surrounded by majestic mountain ranges.

To discover the city we decided to go on the red cap city walking tour to get a better insight in the culture, history, people and customs of La Paz. The meeting point for this approximately 4-hours walking tour is every day at 11am or 2pm at the San Pedro Plaza. Here our guide already had some interesting stories to tell at the San Pedro Prison which is located next to the plaza. It is one of the world’s most interesting prisons right in the middle of the city. Actually there used to be prison tours which is now illegal because once a girl was raped in there, there are many drug-related problems and it is quite dangerous to take the risk going there as it might cost you some pocket money to get out again. Actually the San Pedro Prison is a small city itself with shops, hairdresser, cafes etc and nowadays people live there because it is cheaper. 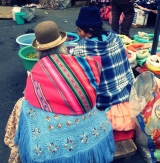 Our next stop was the Rodriguez market. It is an impressing vibrant market which expands through many streets. Here they sell just everything: different kinds of potatoes, vegetables, clothes, kitchenware etc as they do not really have supermarkets in the city. This is the best place to try local products. Our guide also told us that you always should buy from the same lady – also called “cholita” or “caserita”. She is also there to listen to all your problems but if you decide to buy your potatoes from another “cholita” one day, she will not be happy about that and might throw potatoes after you. 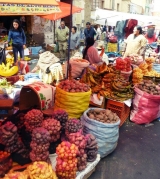 We also learned about the traditional clothing of the “cholitas”. The typical hats they use might be cheap in Bolivia but they also get very expensive ones from Great Britain or Italy which they use for important festivities. Furthermore it has a meaning how they wear their hat – if they wear the hat in the middle it means they are married and if they wear it on the left or right they are single. Their skirts which are also called “polleras” can have up to 10 layers – they use it not just because of the cold weather but also as they want to make their hips look big because they want to show their fertility – so actually chubby is beautiful in Bolivia! Another interesting event in La Paz is watching a Cholita wrestling which is supposed to be a sexy show. You will also see many Bolivians with gold in their teeth – with this they actually show their wealth.

Our next stop was the famous witches market where you can get talisman or powder that are supposed to bring you luck, love, fertility and fortune – but it is most famous for the dried llama foetus the witches are selling for good luck. These lama foetus are used throughout the country by burying them under new constructions as an offering to the goddess Pachamama and it is believed that it keeps construction workers safe. Then we passed the San Francisco Church and visited another local market where we enjoyed a delicious typical fruit juice before continuing to the Plaza Murillo where the presidential palace and national congress are located.

Once we arrived at the final station of the green line in downtown La Paz we took a taxi to the famous moon valley “Valle de la Luna” which is just about 10km away from downtown. It actually is a maze of canyons and huge spires. These sandstone and clay formations were created by the persistent erosion of mountains by strong winds and rains of this area. There are two walking paths – one of about 45minutes and another one of 15minutes to enjoy these beautiful landscapes! Then we returned to La Paz excited about the next adventures that would await us in Bolivia. 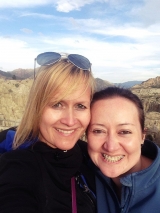 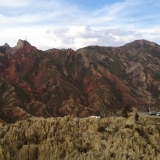