The following three days I would say the highlight of our trip through Bolivia awaited us: exploring the saltflats of Salar Uyuni as well as many other impressing landscapes with colorful lagoons, volcanoes and deserts.

The first day we were picked up at our hotel Samaywasi in Uyuni. We got on our 4×4 jeep with our guide Milton. As drinks are about double the price in the accommodations, we bought some water and beer in town to be prepared for the next days! Our first stop was in Colchani at the  market where you can buy typical handicrafts or some gloves, scarf or hat to be prepared for the cold of the salt flats which are situated at an altitude of 3.600m and cover an area of about 12.000 square kilometers. It is said that about 112.000 years ago all of this area was a huge sea. 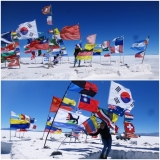 also place for the Dakar Rallye 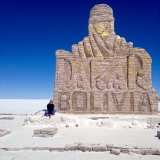 on the way to discover the salt flats 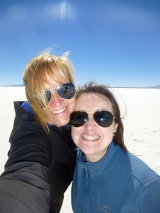 on the way to discover the salt flats

Then we continued our journey passing by the “Isla del Pescado” to the island Incahuasi which was full of huge cactus. We climbed to the top of the small mountain and enjoyed amazing views of the salt flats and surrounding mountains. On top of the mountain we had an amazing 360 degrees  view! When we returned from this short hike, our guide Milton had prepared lunch for us which we enjoyed in these beautiful surroundings. Our next stop was in the middle of the salt flats where we had a lot of fun taking different pictures. This wonderful landscape left us spechless. After this fun photo and video session, we continued to our hostel for this night in the little town Aguaquiza. The hostal Tinkuna was a very nice little accommodation. The walls and many furnitures were made out of salt and luckily they had enough blankets for us so that we spent a nice warm night there and even a warm shower awaited us the next morning! 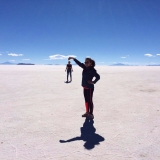 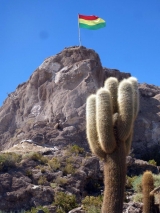 Beautiful landscapes on the way 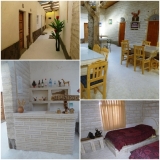 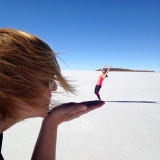 The next day we started our journey at 8am after breakfast! Our first stop was at the so-called galaxy “galaxias” and a cemetery of mummies. In 2003 two men discovered an impressing formation which they named “galaxias”. One of the founders himself is giving the tour about his impressing discovery.

Founder of the galaxies 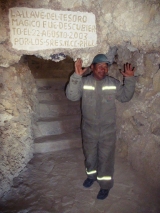 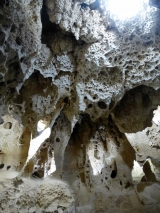 Today our journey took us through the Salar de Chiguana, Ruta Galaxia, volcano Ollague and lagoon Cañapa with flamingos. Many other lagoons and impressing mountain landscapes followed with lagoon Medion, volcan Corina, lagoon Honda, paso del Inca, and the seven-colored mountains of Silala. 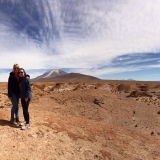 Then we visited the famous stone tree “arbol de piedra” but as it was freezing cold we just got out of the car to take a picture quickly. Our journey for today ended with the visit of the colored lagoon “laguna de colores” where you can find up to 5.000 flamingos in high season. Afterwards we continued to our accommodation for the night which was just a very basic one and for sure it would be a cold night – but the sleeping bags saved us!

Flamingos in the colored lagoon

After we survived the cold night with about minus 12 degrees, we got up at 5am to visit many more places on our last day. The first stop was at the “Géisera Sol de Mañana”. These gushing springs are situated at an altitude of about 5.000m. Then we stopped at the hot springs “termales de polques” which are supposed to have a temperature of 37 degrees. But it was so freezing cold outside that we did not want to go in – not even leave the car. We continued to the Dali desert whose landscapes were just amazing. Then we passed by the volcano Sairekabul and the volcano Licancabur with an altitude of 5.916 m. Here you can also do trekkings. Afterwards we stopped at the green lagoon “Laguna Verde” – unfortunately it has dried out a lot and its color has changed from green to turquoise but it still looked beautiful.

Then we drove quite a while passing beautiful landscapes to the little village Villamar where we had lunch. The guides are actually always carrying all the food from Uyuni and prepare it in the accommodations of each night. Then we continued to a forest of stones to get to the lost city and the lagoon Mysteriosa. We were all very impressed by the different landscapes – everything is just so diverse and beautiful in this area.

Stone forest in the lost city

stone forest in the lost city

Laguna Misteriosa in the lost city

Our next stop was San Cristobal. This village is famous for its colonial church which was brought from the mountains to town as they found silver and to explore it they wanted the church to be in town. Then we continued to Uyuni – our last stop of this amazing trip was the cemetery of trains. In the past the trains were used mainly by mining companies but with the collapsion of the mining industry in the 1940s the trains were abondened here. At night we took our flight back to La Paz. 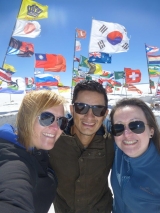 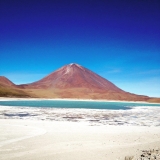 Mysterious lagoon in the lost city 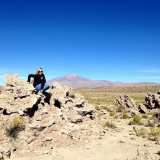 IMPORTANT NOTE: The rainy season is between December and February in the salt flats. This is the time when you can see the sky like a mirror in Salar Uyuni. But you can only visit a small part of the salt flats as it is very dangerous because it is flodded – for example, you do not get to the Island Incahuasi and need to take another way to visit the lagoons and mountains of the 3 day tour which I would definitely recommend! If you prefer to stay in nicer accommodation with heating, this is also possible in the salt flats (best available accommodation are 3-star hotels).