San Jose del Guaviare (Day 3) – The next morning we woke up pretty early to enjoy the highlight of our trip: the overflight of the Chiribiquete National Park. Once I woke up the first thing I did was opening the curtains to check the weather and we could not have been luckier: a clear blue sky without any clouds! This was definitely the best gift ever (and yes the next day was my birthday ;)!) to enjoy one of the most amazing experiences of my life!

It took us about one hour to get to the national park and the more we flew a more dense jungle awaited us with every mile – it just looked like broccoli (and it is actually called like that)! I must say that even these jungle landscapes were already very impressing. On the way my boss (our pilote) told us that there are still three communities living in the Chiribiquete National Park that have not been contacted yet – and they also do not want any contact to the “outside world”. Thinking of the wall paintings that we had just discovered the day before in Nuevo Tolima, I guess these indigenous tribes still use this form of communication. This is pretty hard to imagine in times of smartphones and everything in our digital world, right?! But I am pretty convinced that this is the way they live and I wonder how an escape to this beautiful place could look like?! It must be pretty impressing to get disconnected from the world being in this amazing place – but unfortunately the national park is closed to the public – only overflights  are allowed – after receiving the permissions! 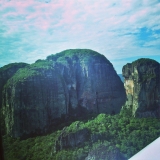 With a surface of 12.800 square kilometers, the Chiribiquete National Park is  about half the size of the country of Belgium and I dare to think about how much natural beauty can be found in this corner of the world. The overflight was just amazing – we were passing different formations of table top mountains – the so-called “tepuys” as well as the dense jungle, impressing waterfalls and colorful rivers. Some of the formations have been given names as they just look like it, for example the hand “La mano”, the castle “el castillo” or the stadium “el estadio”. Furthermore we discovered numerous colorful rivers which seem to be like “Caño Cristales” as well as many waterfalls – huge waterfalls in the middle of the dense jungle or white sandy beaches along black and colorful rivers in the middle of the mystic jungle.

After overflying just a part of this huge beautiful Chiribiquete National Park we returned to San Jose de Guaviare to put fuel into our small aircraft before returning to Bogotá! Of course, it is always possible to do the overflight just as a daytrip from Bogotá taking a small aircraft from the capital city and getting back the same day! And if you take the flight between July and November, we can also include the overflight of Caño Cristales. 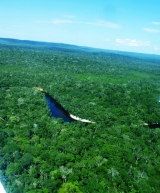 I must say that the overflight of Chiribiquete National Park has been an experience of a lifetime and it definitely is another hidden jewel in Colombia! It might be a little expensive to get there but I highly recommend to discover this natural treasure of Colombia – it is one of the most beautiful places I have ever seen in my life!!! 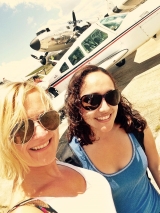